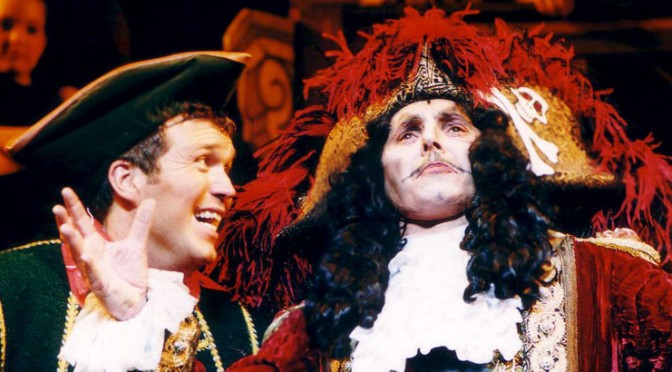 Born in Perth 1957, one of four Fletcher boys, Alan grew up in the newly created southern suburbs amongst bush and goannas. School holidays were spent on the farm in the West Australian wheat belt helping the shearers and generally getting in everyone’s way.

The acting bug bit early with roles in school productions from an early age. Whilst attending Wesley College Alan’s passion for acting developed with major roles in plays from Shakespeare to Schafer. Given Alan’s father and brother were scientists and Alan excelled in science study it was only natural he become an actor!

After three years of University study focused more on extra-curricular acting pursuits than on enrolled subjects, Alan commenced a professional career in the theatre. Under the stewardship of Artistic Director John Milson, Alan developed his craft – not always to rave reviews.

Alan on stage with Warren MitchellAfter 18 months at the “Hole” Alan graduated to the main Perth Theatre Company at the National Theatre working there constantly for another 18 months in every style of theatre from Pinter to Shakespeare, melodrama to musicals.

After three years of constant work Alan headed for Sydney and immediately began a three-week stint on the Grundy Television Production “The Young Doctors” playing a forty something father of three, afflicted with ulcers, at the tender age of 23 years! That’s television!

Almost immediately a trip to New Zealand followed touring with Arthur Lowe in the comedy “Beyond a Joke”. Alan recalls, “Arthur Lowe’s timing was impeccable. He could solicit a laugh from even the slimmest comedy moment, sometimes with just the twitch of an eyebrow. The best comedy lesson I ever had.”

A one-year contract at Penrith’s Q Theatre in Sydney’s west followed. “The repertoire was sensational, particularly Sam Shepard’s ‘Buried Child’. Working intensively in such a tight ensemble was a professional joy.”

Alan then auditioned for the National Institute of Dramatic Art. He was offered a place at NIDA at the same time he was offered a years contract on the popular Crawford Production’s television show “Cop Shop”. Tele won out and an 18 month stint established his television credentials.

“I’ll never know if choosing Cop Shop over further study was the best thing to do but I’ve never had a moments regret” says Alan.

An Australian mini-series & “The Love Boat”

The 1980’s were a period of intense growth for Alan. Perhaps his favourite role was as Frank Vittorio in the Simpson Le Mesurier mini series “Sword of Honour” which chartered the tragic consequences of the Vietnam War.

Alan returned to Perth twice in the eighties to perform in “Don’s Party” and “The Sentimental Bloke”. While in Perth he appeared in the critically acclaimed feature “Fran”.

Alan’s first appearance on US television was playing Morgan Fairchild’s fiancé in The Love Boat.

Numerous guest appearances on Australian television series and comedy programmes were punctuated by three radio series of the satirical ABC comedy program “Don’t Get Off Ya Bike!”.

“Bike was totally out of left field for me. Creator Bryan Dawe suggested we write this programme together. When I reminded him of my lack of credentials in this area he suggested that made me perfect for the job!”

At the same time Alan’s career as a voice artist was developing strongly and corporate presenting work kept him busy and before the cameras.

The MTC, photography and that other “Neighbours” role

In 1988 Alan commenced work at the Melbourne Theatre Company where he remained almost continuously for three years. “My three years at the MTC were the most satisfying of my career in the theatre. Every role was a challenge and the support I received from Australia’s finest actors and directors developed my skills immeasurably.”

Alan as Greg CooperIt was also in 1988 that Alan had his first role on “Neighbours”. For three weeks he played Greg Cooper, a performance that might have disappeared into obscurity were it not for the eagle of eye of thousands of Neighbour’s fans who delighted in spotting Alan many years later when the show was re-run.

It was during the mid eighties that Alan’s work as a photographer developed into a business. Alan began photographing actor friends and, within the space of a few years, he was in demand and recognized as one of Melbourne’s best headshot photographers.

An AFI nomination, US work and marriage

Guest appearances in television such as the ABC comedy Inside Running punctuated this work with one highlight being work in the Comedy sketch show Fast Forward. Alan also appeared in the US telemovie “Mercy Mission” which, after Neighbours, is his most recognized role overseas.

“I loved the nineties for the great work but mostly because I met and married my beautiful wife Jennifer (Channel TEN newsreader Jennifer Hansen). Stability and continuity of work has given me the opportunity of providing a happy and stable life for my family and that’s the greatest creative success I could ever hope for”

In 1994 Alan’s life underwent a complete change. He was offered a one-year contract on Neighbours and, sixteen years later, he’s still there!

“Neighbours has been fantastic for me”, says Alan, “Not just for the obvious financial rewards that constant work brings. The show has given me the opportunity to present a broad range of skills because, by its nature, domestic drama is comedy one minute and high drama the next, week in week out – and all the affairs with gorgeous woman have been a bonus!

“The real bonus of Neighbours is the working relationship I enjoy with the actors who play the Kennedy family. We have become family and the trust we share has freed us to do some fantastic work. I am as proud of my work on Neighbours as I am of any other performance I have given.”

One of the bonuses of working on Neighbours is the opportunity to perform in pantomime in the UK. Alan has appeared in seven pantos, Aladdin as ABANAZAR (twice) and Peter Pan as CAPTAIN HOOK (twice), Jack and the Beanstalk as FLESHCREEP and Robin Hood and the Babes in the Wood as SHERIFF of NOTTINGHAM (twice)

“Panto is the ultimate in fun for a stage actor. The shows are pure entertainment and give me a chance to have a rip roaring time playing the baddy, scaring the kids, giving the adults a laugh…and I get paid!”

Subsequently Alan began touring with the UK band LUCAS fronted by his great mate, rock guitar supremo Johnny Lucas. Their most recent outing was a gig in Reykjavik, capital of Iceland.

Waiting Room has produced two albums “In the Waiting Room” and “Live at the Elephant”. For more details please see the Alan’s Music section of this website.

Despite a frantic Neighbour’s schedule Alan has managed to squeeze in appearances in the stage musicals “MAME” and “SWEET CHARITY”for the Production Company” and two shows of reality TV show “The Great Australian Dog of the Year”. He also appeared in the ITV Reality programme “SOAPSTAR SUPERSTAR” . Alan and wife Jennifer also appeared on the BBC travel show “Wish You Were Here”.

Alan Fletcher”I absolutely loved working on Mame and Sweet Charity, not only for the opportunity to indulge my passion for musicals, but also it gave me a revitalized perspective on Neighbours. Great Aussie Dog was delightful, roaming the country chatting to some fabulous people and meeting their canine “children”.

“I ‘ve always enjoyed presenting lifestyle shows, like Dog and Wish You Were Here. They are an established part of television culture now and the ability to communicate a message to an audience is just as much a part of the actor’s craft as straight work.”

Alan looks forward to a bright future working in Australia and abroad.